Must tell you about a trip we took to Cascais earlier this month. We had never been there before, normally go to Algarve. What have we been missing? Cascais is a beautiful part of the Atlantic coastal region of Portugal, about 40 minutes from Lisbon Airport and 20 minutes from the capital itself. Also near the World Heritage site at Sintra and the biggest casino in Europe at Estoril, if you like that sort of thing.

We were looking for a Spa type hotel, well my wife and daughter were anyway. I was just looking for a holiday of wondering about doing nothing. We were both satisfied.

We arrived on the night Portugal won the European Cup and in fact just as we were booking in, Portugal scored the only goal of the match and we just joined in the celebrations with a fantastic set of staff at the Hotel Miragem, where we stayed.

What can I say about the Miragem that has not already been said? It is simply amazing. The organisation, the meticulous processes, the food, the professional staff, the facilities are such that you can see why we met the Man of the match of the final game of the Euros there. I understand that another famous footballer who shall remain nameless was also there a few days before. Miragem is undoubtably one of the great hotels in the world.

I am looking for an excuse to get back there in September or October. Don’t tell the wife though, otherwise she will want to try somewhere else.

Loved it to bits. 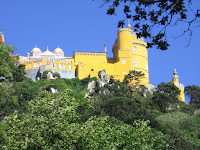 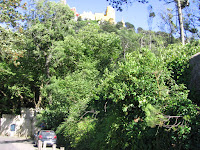 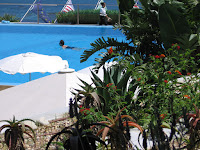 Posted by Roy Merchant at 14:14 No comments:

A Blast from the past

You’ve probably gathered from my last post that I am supposed to be writing a book with the rather grand title "Rhythms Of My Life".

However, I have been stuck in stasis, that place of motionlessness for such a long time, I am beginning to wonder if I will ever finish this book!

I have done 50,000 words and the creative pool from which all my words come, seem to have run out and I cannot find another pool to dive into.

I know the ideas will return, maybe I am being punished for being arrogant and living on the assumption that all I had to do was take and the pool would automatically fill up again, with even better and bigger words than before.

If that assumption is true, then a full pool is a long time coming. However, I wait, I mind-map, I walk, do all the mental exercises that forces the brain to think differently, but nothing changes.

I will continue to go fishing in the pool, and in the meantime, here is part of a true story from the pool when it was full to the brim.

It is a section from my current book "Walking In The Shadows Of Death" available on Amazon, see link below.

"It was 5am on Friday, 22nd December 2000, when I woke up with a bit of a start. I felt, from the time my eyes opened and my head cleared, that my old adversary was in the room. Since my stay in the hospital, I always seem to wake up at the same time in the morning. This time, however, it was different. I knew something was seriously wrong. I felt nauseous, faint and out of breath. I automatically checked my wrist and could not believe what was happening. The VT had returned. My heartbeat was up at 140 beats per minute as opposed to the 55 beats per minute it usually ran at.

I went to the toilet and sat down and as I was about to get up, a hand from the netherworld pushed itself up my rectum, grabbed my heart and started pulling it right out of my body. At least that is what I felt was happening. What was really happening was that the ICD had fired its first shock to bring my heart back into its normal rhythm.
The pain was intense. It was not of this world. It was not just painful. It was without any redeeming features in its remorselessness. It just was what it says it was. Absolute pain.

I screamed and in my own head it sounded like the voice of death. I felt that I was dying again, only this time I knew all about it. My first scream woke Sue up. She looked at me, sleep still in her eyes and she must have seen in my eyes what I was feeling because she quickly changed and, even as she was changing, the second electric shock sank into my heart and literally lifted me up from the bedside table, where I was frantically taking my socks and underpants out to prepare for the ambulance I knew would have to take me back to the hospital, and threw me into the middle of the bed. I weighed fourteen stone and I was lifted like a grain of salt and thrown.

I stayed in the middle of the bed, lying foetus-like and minimising my size and dying. And death laughed at me. It said I was a coward who could not take a little pain. It said did I really think I could escape him by going home? Did I not know that he knew where I lived? I lay there foetus-like, trying to get back into my mother’s womb, where there would be no pain, where I would be safe.

I lay there and screamed as the third shock came and I heard Sue knocking on our next-door neighbour Simon’s door, and Simon, who had already heard the scream and was coming down the stairs as she rang the bell, came over and helped.

I heard Sue’s frantic call to the ambulance and their controlled information gathering, which was more than Sue could bear, when the fourth shock slammed into my heart and I screamed again. I glanced at Simon, who was sitting on the stairs, with his head in his hand, looking totally helpless.

I screamed for the fifth, sixth, seventh and eighth shock and wondered whether any God would let anyone suffer so much pain. What, I wondered, was in it for him? I was now waiting for the shocks to come. I thought they would just keep coming until the battery in the ICD ran out or my heart stopped as it had done before. Only this time if it stopped, there was no cardiac crash team to leap to the rescue. There was only Sue, my by now poor hysterical partner, Simon, my next-door neighbour, and my two youngest children, lying fast asleep in their beds, downstairs.

By the ninth shock, I would have welcomed death. I would have gone over to him and said, “It is a fair cop, just take me and let me not have any more pain, and release Sue and Simon from their nightmare. This fight is between you and me, keep them out of it.” Only in that dark, stark moment of total and absolute despair, when I looked for him, actually sought him out, death was not there".

I am in the middle of writing a book. An autobiography which focuses on the music that inspires me and how collectively they have nurtured me and ultimately, changed my life.

I have been in the "writing void" that place of emptiness, for 8 weeks and although I have written and tidied up other things, I am finding it difficult to get back into the "pool" where all my words and ideas come from.

I know if I keep writing at least 500 words about  anything, that it will return, hence starting this Blog site.

I have placed some of my poems which have been videoed onto the site and would love to read your comments on them.

Have a lookout for my current book on Amazon in paperback and kindle:


Below is an excerpt from  my upcoming book

"The Rhythms Of My Life" - (Copyright Roy Merchant)


"By the time I was nineteen, I had had my share of gropes, pokes, one night quickies, married ladies whose husbands had gone away for the week and everything else. Let’s say that I was no longer a virgin. I don’t know that I ever was one.

My first real love was for a married woman from Argentina called Anna and it started in the Fireplace nightclub on Orchard Drive in downtown, or should I say uptown Singapore. I knew from the moment I first laid eyes on her that she and I were going to be intimate. She did not see me, but I saw her and it was in her eyes. The eyes that incessantly scanned the dance floor looking for something tangible, something she could hold on to, a challenge to occupy her thoughts for a bit longer than the Chinese guy who was holding on to her as if his life depended on keeping her close. He was so afraid of losing her that he had already lost her.

It took a while for me to create the situation that made her notice me. It took a favour from the DJ, it took my friend Neil going over and asking her for a dance, with me just ignoring her. It took me sending over a glass of Drambuie and lemonade and giving her my best smile when I raised the glass to her as she urgently looked all over the semi lit club to see who had bought her the drink.

And Anna and I danced to Sam Cooke and then Otis Redding singing “You Send Me, one after the other and there was no going back after that.

She was blonde, with light tan complexion. Not the chalk white complexion of the china dolls, but more a Mediterranean look, lithe and dressed in an ivory kimono like dress made of silk.

She was killing time and looking for fun in Singapore, whilst her husband rampaged all over South East Asia, making this fortune.  She lived in France, was over in Tokyo with her husband doing some business when she decided to take a 2 week break in Singapore.

She would tell me that Tokyo was too claustrophobic for her, too hemmed in, almost too western.

She loved me because when we got too deep, she ran away back to her children in Paris, abandoning me to the quizzical look of the manager in the Mandarin hotel where she was staying and when she could not stand being away from me anymore, she came back to the Mandarin Hotel in Singapore, where we played lovers for 3 gorgeous months and then we said our final farewell in the summer of 1969. And it broke my heart for 3 years. I had not heard of Millie J at that time, so I listened to O.C. Smith and Derrick Harriot’s “What Can I do” until the pain went back into the background from whence it came".

Posted by Roy Merchant at 04:33 No comments:

Posted by Roy Merchant at 04:32 No comments:

Posted by Roy Merchant at 04:30 No comments:

Posted by Roy Merchant at 04:30 No comments:

Posted by Roy Merchant at 04:29 No comments:

Posted by Roy Merchant at 17:43 No comments:

Posted by Roy Merchant at 17:33 No comments: